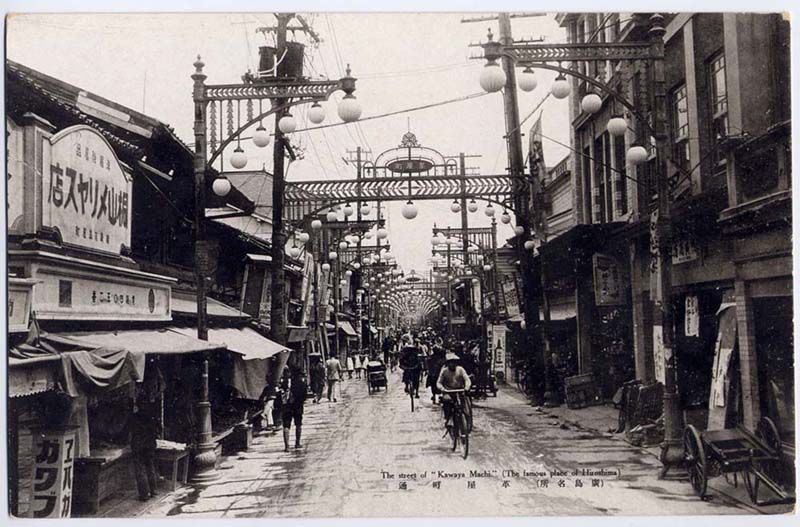 I just woke from a dream.

I was in a Japanese city, not the current time but decades earlier.

Japanese women in kimonos, a few old men, children, running away down a street.

I feel their terror.  Someone they have never seen but fear more than anything else… is coming.

I’ve been following those that are fleeing, but now I look back.  I see the enemy they are fleeing from.

A lone man is walking into town.  A white man, rather unimpressive, walking down the main drag.  He’s a small man in a grey wool suit, white streaks of close cropped hair, wire-rim glasses.  An American, of importance.  Now, I feel this man’s rage.  It is blinding.  It is the complete and utter justified rage that one feels when one has been wronged.  The sheer anguish and indignation that comes from such hate is tangible to me, I can taste it, that need for revenge that surpasses reason and cloaks itself in such a blinding darkness that it takes on the seemingly respectable cloak of inevitability and creative reason.

I see a glimpse of the American’s face more clearly as he gets closer.  Is it President Harry Truman?  In fact, I immediately think that’s who I’m looking at.

This rage hitting me is not just a feeling.  I wish I could describe it better, but it’s like I’m feeling a concept as a complete whole, and it is a collective thing, not merely an individual’s emotion.  It’s like the weight of the world on my shoulders, or more accurately in my gut and my heart.  I at once realize this dream figure, rather ridiculously, is just a symbol, as much as an individual.  I suddenly understand how a leader can push a button he knows will vaporize 100,000 or 100 million people.  Before this moment it has always seemed an abstract concept, this idea of nuclear Armageddon, but now I get it viscerally, I get what Truman must have been feeling when he ordered the dropping of “the bomb”.

It is what an anguished, bloodied society craves desperately when it knows itself to be justified in it’s quest for retribution, however terrible.

I am experiencing the rage of a wounded America, scarred and hardened after a long and bloody war that has taken too much from too many on all sides.  It is heart wrenching and beyond words.  It’s almost too much.  I want to wake up.

I look around at the untouched city of Hiroshima around me.  Neat.  Clean.  Quintessentially Japanese. Left intentionally untouched by American bombs through much of the war perhaps in longing for the day we first demonstrate the terrible effectiveness of our new mastery of the atom.

The thought comes to me that I am the last person to ever see this.  I feel… I know with certainty the wave of rage that I am picking up on is going to sweep all of this away like a towering tsunami.  The women running for safety in kimonos will not find solace, I know this.  It is pointless to run anymore.  The siren cuts short as a single bomb hits fertile earth.

This bomb is different. It is rage itself.

Nuclear fire.  And with the touch of that awful flame, like acid against my skin, the dream becomes truly lucid, and I fully understand I’m standing at ground zero… Hiroshima, on August 6th, 1945 as much as I am assured that I am asleep comfortably in my 2013 bed.

I’m experiencing the last flash of a snapshot in time, at the very moment it is vaporized into history.

A disembodied voice in the dream says, “These are samsaras.”

Intuitively, I know that this means the cycle of samsaras, a string of unresolved karmic memories.  I understand that the rage that I still feel in the darkness that now consumes my mind’s eye and gives me nothing else but itself to focus on, is the web tying a culture, a country, an individual to an endless string of repeated lessons, entanglements that can only cease their repeated action by self realization, self responsibility, self forgiveness… unconditional love.

Until all that rage is recognized and released via unconditional love even of those that may righteously deserve scorn, there can be no release.  As long as that rage survives in my mind’s eye, I… we collectively, will relive our individual and collective moments of destruction, again and again.

And then I wake up.

NOTE:  Later that night we attend the Gate Conference for transformative media, the Eckhart Tolle event in L.A.  They play a trailer to the new film “Samsara” and an explanation of the word and what it represents is given.  I have never really heard of the film but I was basically right in it’s interpretation.  I get the chills as the trailer plays.  It is too great a synchronicity to ignore.  It’s probably the first time I’ve ever heard the word spoken aloud, although in fairness I had read it before and knew vaguely what it meant.

What will it take to cut the strings entangling us to the roles we’ve played in our past?  How many times more must we be the ones walking down the path in righteous anger, or the whirlwind to be reaped, or the running women and children taught that they must be victims, inevitably to be scattered like ash?

What about the even harder path, of total responsibility and surrender to unconditional love that represents the only way around the samsaras of our past?

“Samsara” the movie looks awesome, you should check out the trailer below.  “Baraka”, the previous film by the same filmmaker, is one of my all time faves and probably one of the most profound and visually stunning films about the human experience ever conceived, a film I adored in filmschool, so I look forward to checking out “Samsara”, which looks like the sequel.